Located down the street San Benedetto, the Sant`Agata church is very old (it is mentioned in an act of William Solomon dell`8.8.1481 notary). The temple was later restored in the sixteenth century, while remaining embedded the two original portals. And yet, damaged by the bombings of World War II, it was later demolished in the 50s to be immediately rebuilt.

In our day the main façade of a main portal church topped by a large central and another small side portal rosette.

Internal part has three naves separated by round arches and has, in the central nave, a wooden roof truss. Central Sull`altare there is the beautiful sixteenth-century marble statue of St. Agatha (work by Gagini school, perhaps the Mancino). 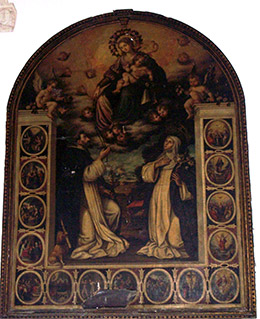 In our day, there is also guarded a painting by Antonio Filingelli from Nicosia, depicting the "Madonna del Rosario" (well signed and dated: Antonius Filingeri fratrer indigenus pingebat 1647), framed by oval depicting the mysteries of Jesus` life, as well as remember from the crown of the rosary.