The Church of St. Nicolella, also known as St. Nicholas le Petit, is located at the foot of the Castle, and it is, to say the Paterno Castello the oldest Nicosiana Church, built by the Greeks.

Even Bartolemeo Provencal author at the end of 1600 unpublished manuscript "old Nicosia, new, sacred and noble", describes it thus: .... The first church in this country quand`era Castle, or farmhouse, ... confesses be was the St. Nicholas Church in the castle ... to which this is the denominationede `French remained, while these San Nicolo Petit was called, which in our language wanted to say smaller than the Greeks founded Basilica da` in the plan. .. that first church holds a crucifix with feet nailed them distinctly l`uno dall`altro all`uso of the Greek Church. " 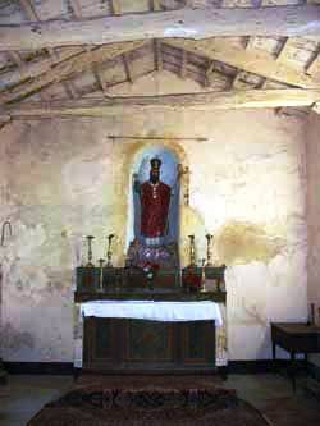 But the reference to the largest "San Nicholas de Plano" as reasons explaining the name "Santa Nicolella" of the early church, it does not seem to be convincing: in fact the Idrisi, in his "Book of King Roger" published in 1154, mentions Nicosia and mentions the neighborhood of St Mary with the districts of Santa Nicolella and Vaccarino; and, since in 1305 the future church of St. Nicholas de Plano appeared to be even a small chapel (only in 1340 describes the majestic and beautiful), it seems unlikely that the name of "Santa le Petit" Nicolella or San Nicola could serve to differentiate it from it (that is, the future of St. Nicholas the Great church).
In any case, from the above, the origin of the church should go back to Byzantine rule in Sicily, where devotion to the saint would spread the eighth century d.C ..
In 727 broke fact war icons: Pope Gregory II refused to accept the decree dell`imperatore Leo III (675-741 AD), which established l`iconoclastia or the destruction of all the representations of Christ, the Virgin Mary and the Saints. The consequences of theological difference were, among others, the complete Graecised of the Church of Sicily which broke away from Rome (which was reunited only after the Norman conquest dell`Isola) el`arrivo of refugees Byzantine dall`Impero waves in Sicily (where there had always been greater religious tolerance than the rest dell`Impero): nuclei of these refugees occupied several villages islanders who often denominavano or the name of the place of origin or the name of the saint to which they were devoted.

Even our country is going through such events and, if the hypothesis is true, it is likely that in the eighth century A.D. nell`attuale Nicosia site Byzantine Stratioti, to defend themselves from Muslim incursions, had erected a fortress around which gathered the Christian populations (Latin and Orthodox), giving rise to a village where they built the primitive and small church dedicated to St. Nicholas the church of Santa precisely Nicolella.

But it remains to explain why the name of St. Nicholas, in the name of the Church, is shown with the diminutive and the female gender, Santa Nicolella precisely, a phenomenon that is repeated in the local lingo is in Niscemi that in Caltagirone, where the name San Nicolò the rods are described respectively as Santa and Santa Niculedda Niculidda [1].

[1] We find solace in a case of very imaginative and, at the same time original, fascinating that brings us back to the early history of our island, and in particular to Sicana domination.

According to this thesis, the name Santa Nicolella could derive dall`etimo Semitic "niku ly dha" or, more precisely, under Akkadian-sicana "nyku-ly" changed in the Sicilian vocabulary by adding the ending "idda / dda / she".

Etymology Akkadian-sicanico, the reduced form "dha" "dhu" she "(derived from" dìyddhayddhuhilla ") stands for thing, territory, district grown and processed. The term Hylla stood for even the most fertile point of the district, ie the point where it formed l`acqua, who was deified in Yshthar goddess, the "little" daughter goddess of the Great Mother (Earth Goddess).

The Yshthar male equivalent, was represented by the god "Ynykos" or "Ny`ku" ("little" son of the Mother Goddess), a term which is referred to a neighboring district with a river or a source d ` water.

Because the names "Nyka and nyku" were synonymous too small and small (in reference to the deity), with this meaning are passed then definitely in the Sicilian dialect; Also the term "yddaella" followed the same fate, wanting then mean not only the fertile territory, but also the diminutive or pet name of a noun.

And again, the observation that the Sicilians place names referring to San Nicolasono often located in the districts placed in proximity of a river or a stream, the phenomenon that leads us to hypothesize that the voice Semitic "Ny`ku" you would then transformed into Nicola after l`avvento of Christianity and following the spread of the devotion of this holy nell`Isola during the Byzantine period.

So wanting to consider the Sicilian Niculidda lexical item (or Nicolella) as a voice arising from semitico- Akkadian language, read it in that language means "the district (dha) which borders (ly) with a stream or a river (Nyku)". 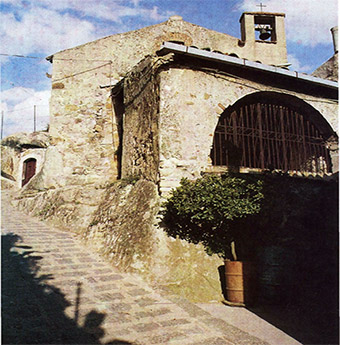 Regarding the appearance architectural the church, and the adjacent streets, retain their original medieval structure.
The church has a small entrance porch having a punctured wall arc (definitely had a precise type of celebratory function, but especially lighting), while internally is presented with a `single nave. Also there were a greek crucified with characteristic symmetrical arms (now preserved nell`Aula Chapter of the Cathedral) and several more images of Greek manufacture.