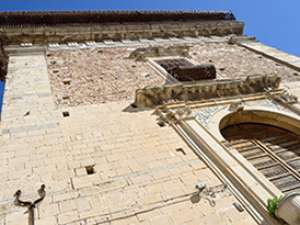 The Church of St. Vincent Ferrer, closed to this day to worship, was in the past part of a cloistered convent of the Dominican Sisters; The complex, located in Largo San Vincenzo, the square facing the Basilica of Santa Maria Maggiore, was built in 1555 commissioned by the Baron Nicolò Cancellario, as reported a plaque placed next to the main door of the church (no longer there, but described by B . Provencal in his manuscript), which read:

Also according to the Provencal, in another table, on said door, read:

The convent, once separated from the church, was connected to it by an arched passage plane that exceeded the current path of Mercy: this passage was used by the nuns to enter the women`s gallery of the church, located above the narthex, and be able to assist in liturgical celebrations.

L`annessa church was completed at the end of 1600 with l`aggiunta a staircase cloverleaf, with the beautiful neoclassical central portal with archivolt to all sixth, the balcony closed by grilles for the cloister at the top and the bell tower which bore one coat of arms.

In 1882, the monastery and church were turned over to the Municipality of Nicosia; after the earthquake of 1967, what remained of the monastery was demolished to make way for a school complex for primary and kindergarten: you only saved the church (declared of historical and artistic interest by the Superintendence of BBCCAA), then restored, especially in a time, in 2007.
The interior, a single nave, with octagonal presbytery, has four side altars where there are the graves of some abbesses, the side entrance (framed on the outside by an eighteenth-century gray stone portal) on the north elevation, and triumphal arch that separates it from the presbytery, which is accessed with a step, in the east. 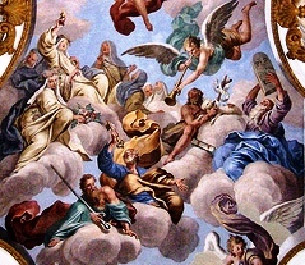 L`interno of the church is decorated with stucco and frescoes commissioned by the Flemish painter Guglielmo Borremans in 1717, where he frescoed the central vault (with the technique of perspective and trompe l`oeil broken through) the great Glory of St. Vincent and the Order Dominican: at the feet of the saint, crowned by the holy Trinity, are made up of Peter, Paul, Moses and John the Baptist, and the holy Dominican (Catherine of Siena, Rose of Lima and Agnes of Montepulciano); The decoration is completed by two circular medallions, the first representing San Domenico with the four Evangelists and the second St. Thomas d`Aquino with the Doctors of the Church. The side entrance Central bezel stands the figure of St. Catherine of Alexandria, while in the other lunettes are represented the Dominican Popes (Innocent V, Benedict XI, Pius V, and Benedict XIII); in the vault of the chapel, a central medallion depicting The Angel marks the elect.

In the center of the presbytery a large canvas, representing Our Lady of the Rosary, St. Dominic, St. Catherine and St. Rosa, surmounts a rich Baroque altar of 1768 polychrome marble (donated by the abbess Maria Teresa Ansaldi of Spataro Marquis), where it is located the wooden statue of St. Vincent, the work of Gangitano Filippo Quattrocchi.

The wall paintings, stucco and statues make this church a real treasure d`arte, unfortunately unknown to the common routes and tourist flows.