The Nicosia Cathedral, dedicated to St. Nicholas of Bari, has been declared a National Monument with R.D. of November 21, 1940.

Perhaps superimposed on an existing place of worship Arabic, it was begun to build in the early 1300s (perhaps in 1302, following the Peace of Caltabellotta); the small church, in a document dated 1305 published by A. Barbato, is mentioned as ... sancti nicolai capilla de plano, and is subject to the most titled maiori ecclesia sancte marie.

The temple was consecrated in 1340, data reported in un`epigrafe (now illegible) carved sull`architrave the Porta del Monte: Year Milleno tercentum cum quadrageno - Virginis intacte postpartum quam satis apte - hos Nexinus Thomas lapides Nicosinus - construxit true you nobis Rex miserere: - here mentis free deditegros - Inde blessed tendunt to regnum havens - jure super num conservet gentem Nicoxie firmiteae (Nell`anno 1340 after the birth of the Virgin Mary, as could quite Nexinus Thomas Nicosia put these stones. you really, Re of Heaven, have mercy on us: you are the One who gave a grateful heart to the afflicted. from here the blessed tend to the Kingdom of Heaven according to God`s righteousness. God save the people of Nicosia and firmly guide him).

According to a deposition by Vincenzo Banesio of 1577, reported by local scholars, because of the fights "... churches are almost ruined et presentim the ecclesia of sancto Nicola`s on the open-top" was perhaps the dome under construction and extension the church up to the bell tower. 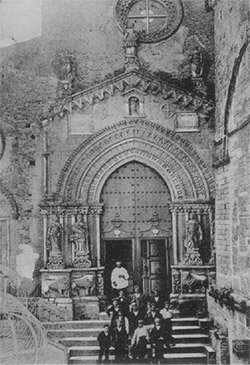 The early fourteenth-century building retains Maggiore portal Gothic-Norman style, enriched by a lintel with a Romanesque ornamentation mainly of acanthus leaves, beads, twisted ropes and spearheads (for its beauty, it is called Heaven`s Gate); Baroque period, in the lateral bases, were added four statues representing the cardinal virtues (in the gable were instead placed three statues representing the Theological Virtues). In the pediment they are placed the shields, to Nicosia, an icon and two rear plaques. In the north elevation, the church shows outside the porch with loggia and inside the sacristy with the chapter house. The loggia and the porch were built between 1489 and 1490, as shown by a deed of sale drawn up in Palermo on March 18, 1489, at the notary Domenico Di Leo (as reported by regret prof. De Francisco). In the facade facing south, the latest style, opens another door with two columns in front, topped by a Bourbon coat of arms.

Inside, the church has three naves separated by columns, with a large transept onto which the underlying chapels; the original painted wooden ceiling (sec. XIV) is covered by a plaster frescoed by the brothers Antonio and Vincenzo Manno (1810); the frescoes of the aisles are Onofrio Tomaselli (1906).

It listed numerous and valuable works of art.

Among the Renaissance marbles include: 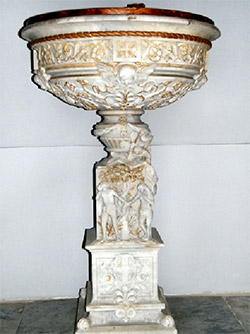 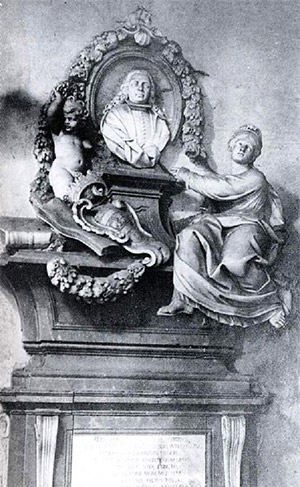 Also statues and baroque wooden carving up a rich collection of works, among which stand out: 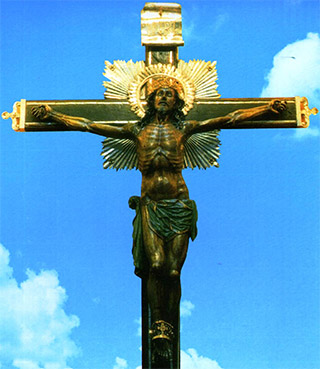 Of great artistic value are the large canvases, among which worthy of mention are:

The Chapter House, where they are placed closets eighteenth century and a statue of St. Nicholas of Gangitano Quattrocchi, constitutes a veritable art gallery with paintings by:

But the main reason of artistic interest is represented by the pictorial decoration of the ancient wooden ceiling (XIV-XV century) which is the only example in Italy of a truss roof painting: it is not visible to our days, having been covered by a barrel vault with lunettes in the early nineteenth century, when it was deemed more appropriate to the function of coverage ecclesiastical once plaster painted with religious scenes (work of Manno brothers) rather than a wooden roof where the sacred representation was mixed with reasons uninitiated.

The wooden roof (basic m.3,60, m.3 to catheti, high m.1,03) has a hull structure with trusses resting view of blister shelves, and is divided into thirteen bays; the framed space in each of the two beams is further divided into square interspersed with small beams that divide them in their turn into panels; at the center of the two major beams are wide boards where are depicted saints and religious scenes.

On the dating of the work, there is only circumstantial evidence.

The coat of arms of Ventimiglia, present in the twelfth and in the third bay, brings us to 1393, when the government of the city of Nicosia was entrusted to Francesco Ventimiglia; other coats of arms are for families magnate nicosiane (Sabia and De Marchisio) of the fourteenth or fifteenth century.

Even more interesting are the heraldic insignia of the Aragonese of Sicily (shield divided into the cross of St. Andrew, with two crowned eagles to the sides having the heads turned to the right, path vertically by four red stripes on a gold background) in the ninth span: the eagles (originally addressed), begin to be represented facing right during the reign of Martini (1401-1410), and then change profoundly in 1412.

The presence, among the paintings of the third span, the monogram of Christ, does however claim to F. Bologna that the date of completion of the work can not be before 1435.
No certainty, therefore, on the dating, but many clues that suggest you install it in the first half of the fifteenth century.