Under the square with same name (the Prayer) is the church of San Francesco di Paola, which dates back to 1630, when the Minimum founded it with l`annesso convent (which, following the confiscation of church property by the State, became the seat dell`ospedale "C.Basilotta" Nicosia). The brothers were in Nicosia in 1612 led by Domenico Caldara (Lenten preacher of quell`anno), they were awarded by the Council of the Nobles of St. Lucia church in the bottom of St. Michael neighborhood and the right to collect a fish roll for each scale that s`innalzava the square. Later, to l`inospitalità site, they moved first to San Benedetto and then (in 1630) nell`attuale site. 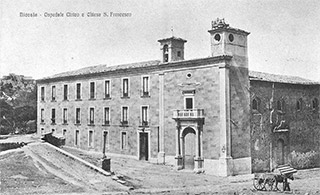 The church has two portals: one side facing the street Matteotti (walled up after the 1967 earthquake, when they were carried out reinforcement work on the report), the main el`altro facing l`omonima square, with beautiful portal which has two front columns in whose bases are carved ancient sights landscape of the country (unfortunately deteriorated by time and neglect).

Inside, the original baroque altar carved wood and rich gold ornaments pure has been replaced, for irreparable deterioration, around fifty years with a marble altar.

The internal part preserves valuable works of art, such as: